In this video you will see the KJLH 102.3 Radio host of the morning show Front PageDominique DiPrima interviewing Ross Jordan an award-winning accredited producer, director, cinematographer, and editor specializing in motions pictures and television productions. Distinguished and respected as an expert in the film industry and revered by fans worldwide, Ross Jordan is one of California’s most sought after producers. Best known throughout the Caribbean for the award winning film ‘Stranded N Dandgriga’, which won at the Jamaican International Reggae Film Festival for Best Comedy Feature, Ross Jordan’ credits include “Who We Are Hurricane Katrina” and “Road 2 Damascus” among other productions that hit the small and big screen. 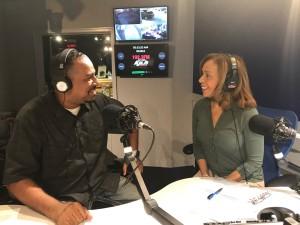 Since 1992 the award-winning KJLH Front Page show, hosted by Emmy-winning host Dominique DiPrima, has been Black Los Angeles’ early morning communications drum.  Catering to a predominantly African-American audience, the show can be heard from 4:30 a.m. to 6 a.m. Monday through Friday on Radio Free 102.3 KJLH, home of the Steve Harvey Morning Show.

FRONT PAGE with Dominique DiPrima Monday - Friday from 4:30am - 6:00am